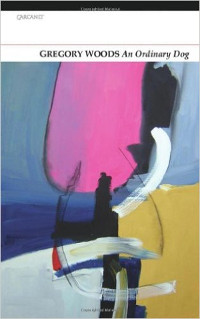 "An Ordinary Dog is a carnival of clashing forms and tones, deployed with cool wit and technical precision. They bear sceptical witness to - what? To the affecting ordinariness of human needs, to the vanity of human wishes. Woods writes about desire: sacred and profane, serene and frantic, refined and grubby - often betrayed by cussedness, always complicated by external events."

"Looking back to times of crisis when history is endured and reinvented, An Ordinary Dog explores where myth degenerates into faith and reason falters. The mood veers between equanimity and desperation; the focus between detachment and intimate involvement."­

Gregory Woods is not a poet to be pinned down by epithets, by association with schools or movements, or by comparisons to other poets or artists. He is a highly skilled formalist, but many of his poems use freer rhythms, and he is also an inveterate inventor and manipulator of forms. His best poems couple a willingness to get at the truth and a stunning ability to turn language to his purposes ... There are a few slight echoes of Larkin in some poems ... others have the terseness and universality of Ungaretti. But Woods is a subverter, a questioner ... and his work has an identity and a splendour all its own.

The Protean nature of Gregory Woods’ poetic gifts is well displayed here in An Ordinary Dog, with its variety of forms and voices. A formidably accomplished formalist when he wants to be, Woods will use humour to make profoundly serious points, and use flashes of wit to leaven (and slip home) the serious ... There’s variety, depth and wit in abundance, and Woods surely merits the wider readership that publication by Carcanet brings. The sheer inventiveness and the linguistic resourcefulness are a joy.

Woods’ serious poetry matches the best of [Thom] Gunn or [Mark] Doty with his conjurations of gay experience.

There is a lot of enigma and allegory in An Ordinary Dog; confident, elegant lines send out little beams of light that illuminate something indeterminate. They’ll frequently refer to a subject or place that seems central to the poem, but leave you wondering what, where, or who? ... The pleasure of language play is certainly part of the charm of Woods’ poetry. This is an erudite, literary ‘aware’ collection—a game-at-chess for the writer and the reader.

Gregory Woods’s new collection, An Ordinary Dog, contains countless examples of his ability to handle material with a compelling combination of control and energy. His overt celebration of the physical body is matched by a delight in rhyme and form. Sometimes this can seem like extremely clever playfulness—private exercises in rhyme and eroticism almost — but often the result is a clarity of tone, a density of meaning and a highly charged poetic fluency[.]

A memorable sequence of stylish poems. It is a book largely distinguished by the shifts in its diction; one minute offering the unadorned narrative line, the next the resourcefulness of syntax and word-selection strongly reminiscent, at times, of W.S. Graham. There is something of the great language baron in Woods’s intelligence and sensibility ... In so many respects, Woods’s way with language isn’t English. It’s not quite European, either ... This kind of writing surfaces and dives throughout the text in swirls of intensification, beautifully controlled. Over one-hundred-and-thirty-four pages Woods convinces me [of] the extent to which he really is a one-off; in terms of range, in terms of economy of scale, he is very much his own man ... arguably at his best when offering fourteen deftly sabotaged sonnets as an opening to Part Two ... Woods’s formal acuity is abundantly in evidence and again and again he proves himself able (when required) really to turn it on[.]

A terrific collection ... This really is virtuoso writing of the highest order. I mean, the craft with which these poems are put together beggars belief ... There’s this weight and consideration of every word that I find in Petrarch ... It really is a quite magisterial book. It’s a wonderful piece of writing.