Very Soon I Shall Know & Art in Heaven 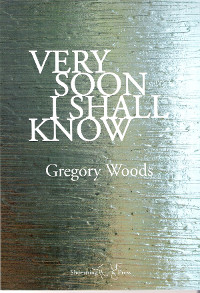 The people in these poems are coping with the extremes of ordinary life. In looking to the past, to exalt or repudiate it, they make and unmake their futures.

Using unrhymed iambic trimeter, Woods plays forty variations on the sonnet's simple progress from octet to sestet. Pared down to its basics, all sinew and bone, the form is efficient and starkly beautiful.

"Freedom from constraint ... is what these poems seek (in their tightly constrained form) ... The tensions of ordinary lives unravel the self in ordinary circumstances, and Woods understands how these can overwhelm" -- Jennifer A. McGowan, The North 51 (Autumn 2013)

"I was half way through this pamphlet by Gregory Woods when I noticed I was trembling slightly. Poems that have this effect on me don’t come along often" -- Helen Evans, Sphinx

"Woods writes about the human body and its appetites better than most poets around today, and the lean, honed nature of these poems makes them the perfect vehicle for that" -- Matt Merritt, Sphinx

This book is available to purchase from Amazon and Shoestring Press.

Art in Heaven is a sequence of 35 pared-down sonnets in unrhymed iambic trimeter. The ordinary lives of the people in them are conveyed in spare detail. Most are stricken by desire or regret, some by indifference. Memory haunts or comforts them. Woods handles them all with the same dispassionate intensity.

"A poet of tremendous facility and feeling, Gregory Woods has a way of making the formal challenges he sets himself look easy. Art in Heaven is a sequence of thirty-five beautifully turned unrhymed trimeter sonnets. The form's brevity lends itself to depictions of ephemeral experiences, to glances and second glances, to fleeting affairs and ... to the patchy memories that outlast them. ... [One] fine poem in this collection ... concludes with the observation that 'A narrow bed is wide / enough for fruitful dreams'. The same could be said of Woods's choice of the trimeter line, and of the poetry pamphlet itself." -- Paul Batchelor, Times Literary Supplement (9 December 2016)

"The late, great Peter Porter once observed that Gregory Woods was probably the most accomplished of contemporary formalist poets, which, if you pause to think where such praise comes from, is not merely a copper-bottomed endorsement but outstandingly generous. And yet it’s no more than Woods deserves. Look on his work, ye formalists, and despair ... [H]is work invites comparison with the best of Robert Graves ... I can’t think of any poet who so adroitly manages what is often tricky, even recalcitrant, material." -- John Lucas, London Grip (January 2017)

“[T]hese were not ‘nice’ poems, but ruthless in their observational power, amplified by their quiet musicality … Woods, like the best of poets, is able to pivot the entire poem in a single word. … It’s not that Woods is able to turn language to his purpose, but rather that he is able to enslave himself to it so well. As such, the best of his poems read as extemporisation, and sound natural. … The combination of musicality, deft handling of line-breaks, and a knack for delivering a sucker-punch nine times out of ten should be enough to convince you that Art in Heaven is worth the modest cover price”—Edward Ferrari, New Walk 12 (Spring/Summer 2016)